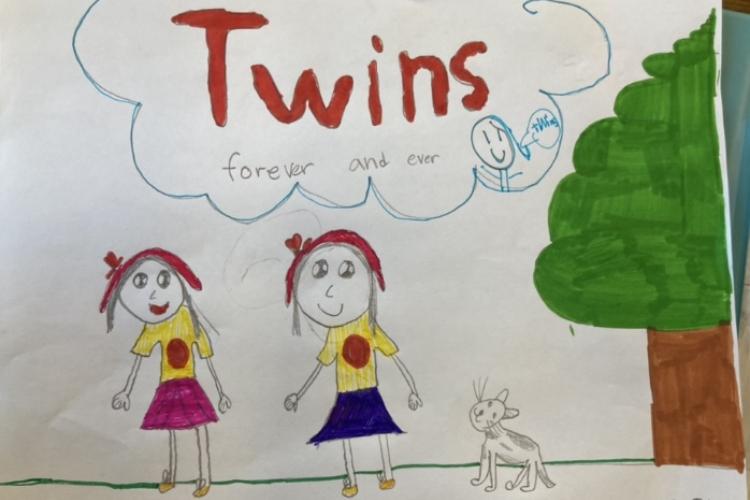 A drawing done showing a pair of fraternal twins wearing the same outfit. Trying to be more alike.

Most people are familiar with identical and fraternal twins, but there are surprisingly ten different types of twins.

Some of these types of twins reside on Arroyo Grande High School’s (AGHS) campus.

The twins highlighted in this issue are Paige and Madi Bridges (‘23).

The pair are often seen around AGHS wearing Marvel-themed sweatshirts with blue jeans. They tend to match daily. At first glance, they seem almost identical.

However, Paige and Madi are actually fraternal twins. Their differences are slight, but noticeable upon a closer look. Paige is a little taller than Madi and she has a more slanted eye shape.

Many likely assume they are identical twins based on their mannerisms and outfits, and despite being determined fraternal twins, they don’t always believe their status.

“I always question all the time… am I fraternal?” Paige said.

Between dressing the same and eating lunch together there’s not much one twin does that the other does not.

“We do have our own interest in some things, but overall, extremely similar,” Madi said.

Although like any siblings, they aren’t always on the same wavelength. They may share similar thoughts and lifestyles, but Paige and Madi aren’t entirely in sync when it comes to chores and household duties. Between cleaning, clothes, and responsibilities it’s clear these twins bicker just like other typical siblings.

“We fight about… responsibility. It’s like if I did something… it’s [now] your turn today, you have to do this. I already did this… and this yesterday. We fight over that all the time,” Madi said.

They also have their own individual personalities.

“[Paige] is goofy, caring, and the life of the party,” Madi said, while Paige thinks Madi is “… a kind soul, very funny, and extremely caring.”

Despite their differences, Madi and Paige Bridges are really happy with their bond as twins.

“I’m really glad to have a twin sister and… that we are close with each other as weird as that sounds, but I’m really glad that I have a best friend to talk to,” Paige said, and Madi agreed.