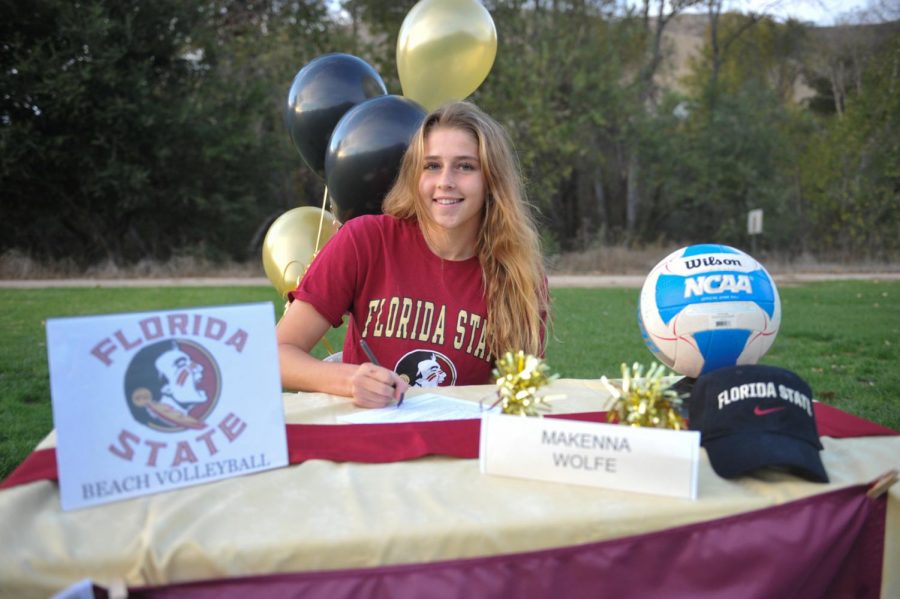 Jennie Finch once said, “If you want it bad enough, and you’re willing to make the sacrifices, you can do it. But first, you have to believe in yourself.” Being a student-athlete and wanting to pursue a college athletic career takes great sacrifice and determination. Students who wish to do so need to be willing to sacrifice their free time with friends and even family. Sometimes they’ll have to miss birthdays, holidays, and simply having the pleasure of just being a kid. They do all this to train as often as possible, to improve, and to prepare to show the college scouts, those able to give them the best shot at achieving their goal, what they’ve got. Makenna Wolfe, without a doubt, made the endless hours of training and countless sacrifices worth it.

Wolfe is an Arroyo Grande high school (AGHS) senior, and this year, on November 11th, she made it official and signed her Letter of National Intent to play for Florida State University on the Women’s Beach Volleyball team. There are quite a few student-athletes who most of their lives have dreamt of athletically committing to a college or university to further both their athletic and academic career. However, Wolfe didn’t always want to play in college. It wasn’t until she was a teenager and realized that she had what it took to compete at the college-level, and so she decided to put in the work to make her dream become a reality.

She started picking up the pace with her training and tournament schedule near the start of high school.

“[A]round age 14 I started going down south to play in more beach tournaments basically every weekend and beach volleyball became more of a priority.”

Wolfe was very thankful to be able to travel to tournaments and have coaches and family by her side. However, it was difficult watching her friends and peers making memories together during their free time without her.

“Some struggles I had to go through were definitely giving up a lot of my social life. I was always away playing in tournaments or at practices almost every weekend, and it took away time from hanging out with friends and just being social.”

It is very common for serious student-athletes to feel left out because they tend to spend most of their free time training and competing. The other free moments are spent focusing on schoolwork such as homework, studying for tests, and even catching up on missed assignments because of having to travel to competitions. On top of this, Wolfe didn’t quit even when she had an injury that made her question the rest of her career in volleyball.

“There was a time when I wanted to give up and that was when I injured my shoulder and I just felt like I wasn’t ever going to be the same and that I wasn’t going to be good enough anymore. I was able to overcome that by just putting in the work by going to physical therapy and slowly getting back into the hang of everything and learning new things to help my game that I wasn’t using before.”

Overall, Wolfe worked through her struggles and decided to make something good come out of everything, despite her struggles and her near decision to give up being a serious student-athlete. She continued on for her loved ones, but most importantly for herself, so she could be proud of everything she accomplished, and after everything, she physically and mentally endured.

“I want to make my parents proud and happy that they have done so much and it was for a reason, but for me, I just wanted something good to come out of all the time and sacrifices I had to make in order to be where I am now.”

She certainly achieved her goal. Florida State University (FSU) is ranked well within the top ten for Women’s Beach Volleyball and is home to a few of the top individually ranked players. A solid team such as FSU includes teamwork, a strong mentality, and an uplifting attitude, which means Wolfe will be a great addition to their team.

“I think I am a positive and mentally strong competitor. I always want to be positive, because it just makes the game more enjoyable, but also makes your partner feel more comfortable when things aren’t well,” she began. “[M]entality had been something I had struggled with, but over time I have learned the importance of it and it definitely has changed my game for the better.”

Moreover, with the past mental struggles and the challenges of the sport, Wolfe found someone she could always count on to be there – her mom.

“She has just always been by my side from the day I started playing to now. She has helped me get to where I am and without her, I don’t think I would have gotten as far,” Wolfe claimed.

Wolfe’s mom took her to tournaments and stood with her no matter if she won or lost. Because of this, Wolfe and her mom formed a very special bond that allowed Wolfe to feel understood when times weren’t so easy. Her mom was one of the biggest motivations for her to continue to fight for her goal, and thanks to her mom’s support, she has achieved it and she feels enthusiastic and ready for the next four years.

“It feels great to continue my academic and athletic career at Florida State! I am very excited to leave this area and experience new things and meet new people. Out with the old, in with the new.”