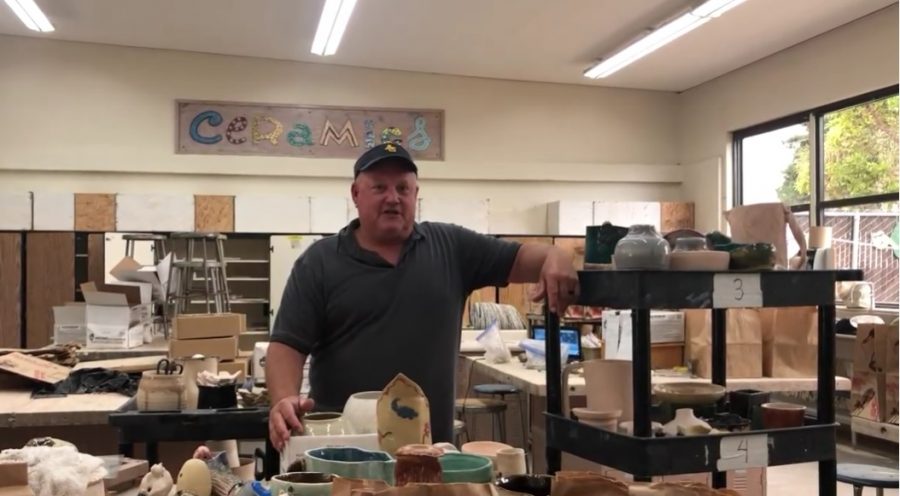 Ben Doty (pictured above) is retiring after 24 years of teaching Ceramics at Arroyo Grande High School.

After serving as Arroyo Grande High School’s ceramics teacher for 24 years, Ben Doty has made the decision to retire.

Doty, who was originally hired by the Lucia Mar Unified School District as a football coach in 1983, worked for the district for three years before returning to school to finish his credential. After graduating, Doty taught ceramics at Fresno State and Coalinga High School before returning to Arroyo Grande in 1996 to teach his craft. Doty’s contagious passion for the arts, along with his unique style of education, has certified his legacy as one of Arroyo Grande High School’s greatest art teachers. Many of Doty’s students recall the positive impact he made during their time in his class.

“Doty was a very encouraging teacher,” said senior Gabriel Allen, a first-year ceramics student. “Even though I wasn’t a very artsy person, he still applauded my efforts on my projects, which made them feel worthwhile.”

“I feel like at some point in everyone’s life, they meet someone who will have a profound effect on their life … For me, Doty was one of those people.” said Evan Valdez, a student who previously took Doty’s “Advanced Ceramics” course. ”I can say for sure that, if it wasn’t for him, my life would’ve turned out very different. He was more than a teacher to the students whose paths he

crossed – he was also a good friend.”

Doty was first led to pursue a career in the arts during his time as a student in Arroyo Grande High School, which, at the time, offered a limited selection of art classes.

“Art was my means [in high school], and I was not the best student, academically-speaking. I took every art class the school had, and they were what got me through my English and Math classes,” explained Doty.

Doty’s early interest in the arts, however, did not include ceramic art; it wouldn’t be until college that he would develop his skill in ceramics and find his life’s calling. For him, much of its appeal stems from the variety of methods that can be utilized in creating ceramic art as opposed to more traditional art forms such as painting and illustrating.

“With two-dimensional art, you need to begin with a little skill before you can develop your talent over time. With ceramics, students can more easily find a niche … you can take any student and find their success, whether they’re more mechanically or creatively oriented, which style of crafting they’re more suited to.”

It’s this malleable aspect of ceramics that allowed Doty to bring out the very best in his students, allowing them to take greater creative control over the artwork they produced. To Doty, among the most rewarding aspects of teaching ceramics was the satisfaction expressed by students when they forged a serious connection with their art.

“When every student begins to come out with good pieces, there’s a bit of an “a-ha” moment; the kids have an awakening, where they find what they like and what they’re good at,” Doty said. “They can walk through a museum, see some ancient pottery, and just gain a deeper understanding of art itself.”

Another aspect of teaching ceramics which Doty treasures is the sentimental value that his students will inevitably attach to their work.

“When students leave high school, graduate college, move on with their lives, and settle into their first house, their parents will bring them their “box” of old school stuff that’s up in the attic. And it’s never filled with any English papers or Math exams – there’s always art.” Doty said. “It’s funny – I’ll occasionally run into former students in public. We’ll strike up a conversation, and they’ll always mention something they made in my class, ten or twenty-something years ago, that they’ve kept since kept high school.”

In the past year, however, Doty’s class underwent a radical change. As a teacher in the midst of the COVID-19 pandemic, Doty had a difficult time adapting to new distance learning policies.

“[Distance learning] is something I really struggled with this year … when I’m in class, and I’m face-to-face with my students, there’s this energy that they bring into the classroom, and everyone can just feed off of each other’s creativity. I really miss being in school,” Doty says.

Doty looks forward to spending more time with his children and grandchildren with his newly-acquired free time, though he isn’t quite ready to step away from the potter’s wheel for good; Doty has plans for the future, including but not limited to producing art in his personal studio, teaching community pottery classes, and opening another studio for fledgling artists to rent space. As for Doty’s advice to seniors graduating from high school in 2021, he has one valuable piece of wisdom to share.

“The most important part of life?” Doty says. “Be a good person.”

The Eagle Times would like to thank Mr. Doty for his words of wisdom and for his distinguished career.