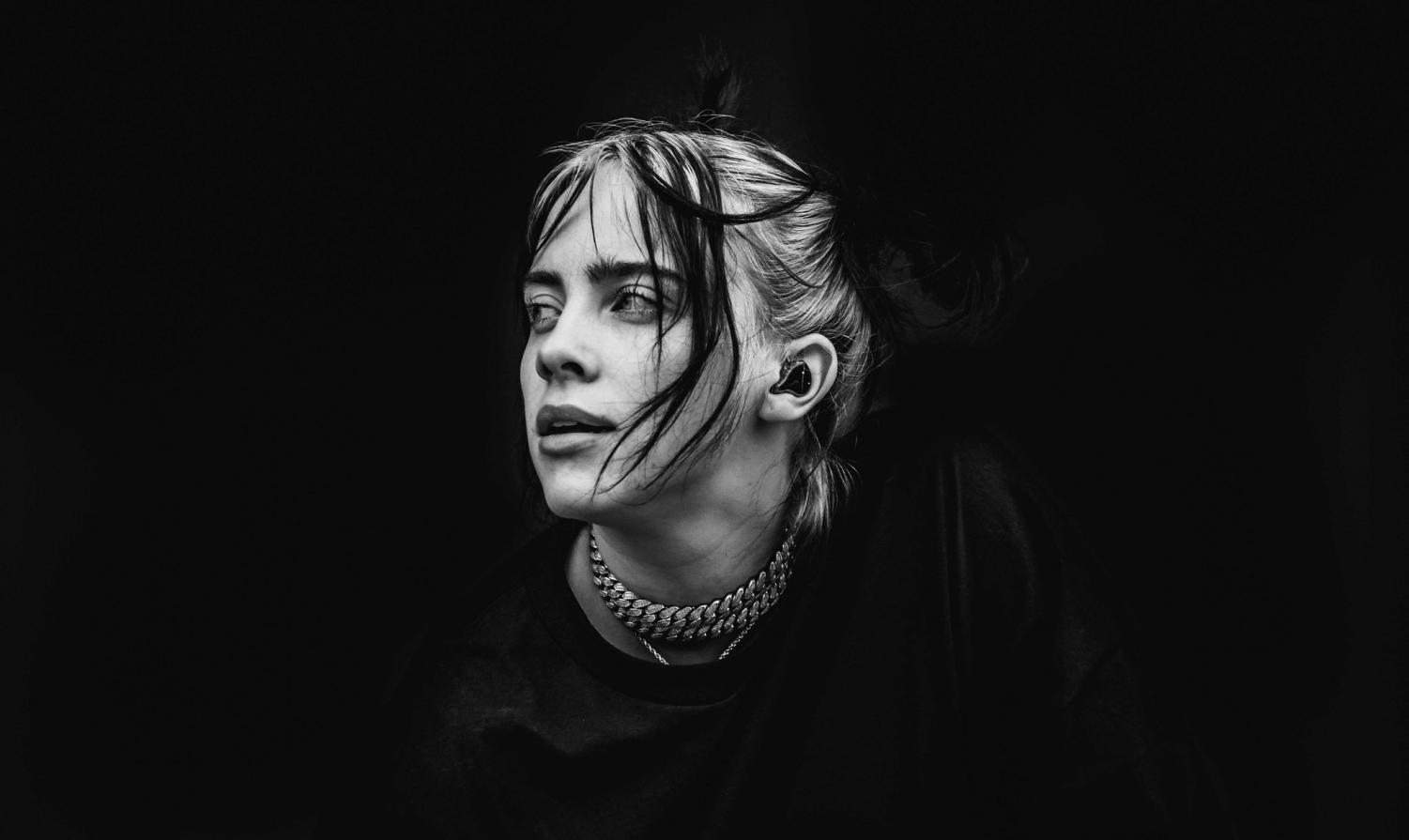 Eilish photographed during her performance at Pukkelpop Festival in Belgium in 2019. (Lars Crommelinck)

Eilish photographed during her performance at Pukkelpop Festival in Belgium in 2019.

The question of what defines a young woman lacks an answer that is simultaneously universal and precise. The meaning of the word “woman” has been equally built up and dismantled in recent years with hopes of removing stigma and boosting empowerment, yet lingering confusion still surrounds the definition of womanhood in a progressive society trying to dismantle the housewife cliché.

A 2020 article from USA Today explains the Oxford Dictionary’s new-and-improved definition of the word ‘woman’.

“Many definitions related to gender, particularly those concerning ‘sexual attractiveness or activity’ were revised and references to gender were removed from the examples for words ‘typically associated with women’ including housework, high-maintenance and anatomy.”

The confusion around the positive meaning within womanhood increases when activities associated with female empowerment are slammed due to their potential appeal to the male gaze, or the assumption that they are done solely for attention.

“In the past couple of years, the ‘attention-seeking’ label has become an all-purpose way to gaslight feminists, silence those who demand restitution for a specific wrong, and shame women for the way they present their bodies and selves in public,” said Rebecca Onion of Slate Magazine.

Showing skin is just one of many things that can earn a woman both applause and scathing criticism.

When a woman has amassed a monstrous social media following and Glamour magazine deems her “the role model we wish we had in our teens” at a mere 19 years of age, navigating womanhood reaches a level of treachery not unlike walking through a minefield‒ only each landmine symbolizes a critic or reporter waiting to tear her apart.

Since her rise to fame beginning in 2015, Eilish’s “trademark look” has become baggy clothing that covers most of her skin. Many have praised her for hiding her body, comparing her to other female stars who present themselves differently.

Reporter Sam Reed of InStyle magazine stated, “Whereas most emerging starlets (and I) would faint at the very idea of wearing a Chanel gown, Billie proved she’s the one with the power by not wearing a look typical of the fashion house, something with more straightforward sex appeal, or a poofy skirt — she wasn’t going to give up her style for the sake of a name brand.”

However, Billie’s latest photoshoot with British Vogue depicting her in corsets and stockings caused many of her former followers to revoke their praise. One look at the comments beneath her Instagram posts reveals critiques ranging from confused to hateful.

“Yeah she is a sellout. You know she was paid to do this right? This isn’t about confidence,” claims one Instagram user.

A second user contemplated, “…She built her entire brand being that she didn’t want to be like everyone else and she wanted her body to be a mystery so it’s kinda weird!”

“Well I thought you were different… the picture is amazing, but I thought you’re not into this kinda stuff… that makes you just like the others,” announced another.

Some negative comments call her a sellout or a hypocrite, while others seem to pity her instead.

“‘Proof that money can make you change your values and sell out,’” declares a Daily Mail headline, “…despite years of vowing to ‘hide her body,’” the headline concludes.

Underneath the article, one reader comments, “Very disappointing Bille. You have let yourself down and your fans.”

“…Bashing men in the interview, perhaps she should take a look around at all the male inventions that she uses in her pampered life every day that without she would be singing on a street corner into a hairbrush,” asserts another.

One stated, “Selling bodies, what women do best.”

“In 2019, she said: ‘I never want the world to know everything about me. That’s why I wear big, baggy clothes: Nobody can have an opinion’ – so in 2021 – she wants the opposite…ie: everyone to have an opinion and comment on all her physical attributes, corners, cracks, rolling mounds, peaks, and all I suppose..is this hypocrisy or what ? or an ’empowered woman’ ?” questioned an additional reader.

However, these allegations fall flat in juxtaposition with Eilish’s past statements.

When discussing why she wears baggy clothing, Eilish said, “The only reason I did it was ‘cos I hated my body”, in an interview with Dazed magazine in 2020. “If I wore a dress to something, I would be hated for it. People would be like, ‘You’ve changed, how dare you do what you’ve always rebelled against?’ I’m like, ‘I’m not rebelling against anything, really.’ I can’t stress it enough. I’m just wearing what I wanna wear. If there’s a day when I’m like, ‘You know what, I feel comfortable with my belly right now, and I wanna show my belly,’ I should be allowed to do that,” she continued.

Whether people decide to accept those words or not, questions remain in regards to Eilish’s latest photoshoot with British Vogue and the influence behind it, assuming an influence exists at all.

Nearly anyone familiar with Eilish knows she rose to fame at a young age and spent the majority of her teenage years in the public eye. She established a reputation for wearing a wide variety of colorful and unique clothing, and her hair and outfits underwent an evolution throughout her years of fame so far, from huge puffy vests to green roots.

So is the change observed in this photoshoot just another instance of a young woman going through a new fashion phase, or are Eilish’s fame and media pressure in greater effect?

“I do think her changing appearance is a normal part of a teen’s transition into adulthood, not necessarily a result of social media, though it is amplified by her fame and social media,” said Bella Gonzalez (‘22).

“Honestly I think this is a huge step for Billie and her self-love. she’s grown to be more comfortable with herself and has learned that the media can’t control her,” voiced Blake Watts (‘21).

Additionally, should fame provide a sound basis to judge how a young person should express themselves or share their values?

“I honestly think that no amount of criticism would be fair for anybody, and they should just feel free to do whatever they want (as long as it’s good) and not be judged or criticized heavily. And with fame, there always comes negativity, but I don’t think the hate is because of her fame,” said Elizabeth Sugden (‘26).

“No one should be expected to dress a certain way just because they did at one point in time. I liked how she dressed before and I like how she’s dressing now. Especially because she’s so young, she’s still growing and maturing and becoming her own person. No one should expect a 16-year-old to finalize their life-long style,” Colleen Rhatigan (‘21) explained.

Not only do age and fame play a significant role in an individual’s actions and how they are received, social media also serves as a catalyst for criticism and distortion of public opinion.

Dez Ambos (‘22) remarked, “Well just personally, I believe she looks beautiful. And I don’t like how the media is making comments about how she should present herself.”

“Social media does make famous people more accessible, which is a good and bad thing. It is good because it helps famous people stay relevant and for them to become known to more people. The main negative though is being more accessible to hate very quickly,” reasoned Carmen DeChaine (‘21).

“Social media can tend to idolize popular figures as celestial-like beings. On the opposite end, there’s a lot of places sharing hatred. So yes, social media can distort the typical public opinion on a popular figure but there also are people who still agree with these views,” Rhatigan stated. “Also, people only post on social media when they feel their best which isn’t what reality is really like… I think social media could be a cool platform for celebrities to show us that they’re just like us, but instead, it’s just another part of the business.”

Eilish is growing up in the age of technology. While female artists have been pushing boundaries and challenging expectations for decades, one could argue that she faces more or less struggles given the current era of social media amplification.

“There are more stereotypes for younger people and more expectations too,” said Sugden in regards to present times in comparison to previous generations.

However, to say that female stars of earlier decades were not subject to the rigors of public opinion would be false.

When female pop icon Madonna accepted the Woman of the Year Award at the Billboard Women in Music Awards in 2016, “she thanked the organizers ‘for acknowledging my ability to continue my career for 34 years in the face of blatant sexism and misogyny and constant bullying and relentless abuse”, according to Helen Brown of The Independent.

Additionally, Karen Corday of Grunge reported on the cruelty that plagued Joan Jett, trailblazer for females in the rock genre, in her early career.

Jett stated, “It’s difficult to get across to people what it’s like to be spat at… After the gig, I would be dripping in spit, and just put my head in my hands and cry out of sheer frustration.”

The film Edgeplay also mentions other mistreatment of Jett’s band, The Runaways, recalling manager Kim Fowley persuading lead singer Cherie Currie to perform and pose for photographs in minimal clothing, even her underwear.

DeChaine contended, “I think that no matter what a woman does while in the spotlight, there will be criticism. With or without social media, people are constantly trying to hate on women for trying to own their bodies.”

All in all, there are some clear differences in opinion regarding Eilish’s Vogue shoot.

“ I interpreted it as her honoring femininity and a more traditional type of womanhood after years of avoiding it,” expressed Gonzalez.

DeChaine asserted, “The message I got from the photoshoot was that women should be in charge of their own bodies and should not hide it in fear of being sexualized. We sadly live in a society that looks down on women who are not afraid to dress how they want, and Billie showed us that we shouldn’t let the haters bring women down for having bodies.”

“I think Billie is incredibly smart, way more than people realize, so I think this change was natural and it was what she wanted. She’s made it clear in interviews that she wants to be herself and not let other people decide what she does,” proclaimed Rhatigan.

“The thing I feel bad about, though, is how much people prey on her. The day she turned 18 people were so happy for her to be legal so they could sexualize her without being seen as a criminal. And simultaneously, her style, until she was 18, was one that covered her body much more. I think maybe she knew that these predators were there and was scared but now she’s living more for herself and not letting other people dictate what she does,” she concluded.

In her British Vogue interview, Eilish predicted a possible retort to her photos, mocking, “‘If you’re about body positivity, why would you wear a corset? Why wouldn’t you show your actual body?’ She raises her eyebrows.

‘My thing is that I can do whatever I want.’”