The progression of the artwork over the course of a week

AGHS vandals show their true colors by trampling someone else's

Following the end of Kindness Week, a group of students started a chain of vandalism against a specific prideful and inclusive Chalk Talk square on campus.

A group of AGHS juniors and seniors (who chose to remain anonymous for safety and privacy concerns) depicted an all-inclusive “safe space” square during Chalk Talk on Thursday, September 16th.

Using brightly colored oil pastels, the group drew what is known as the “progress” pride flag, designed by Daniel Quasar, an updated and more politically correct version of the 1978 rainbow stripe flag. The progress flag maintains the same horizontal rainbow stripes, but it is instead accompanied on the right side with black and brown stripes for racial inclusivity, white, pink, and blue stripes to represent transgender people, and sometimes a yellow triangle with a purple circle as a homage to the intersex community.

In the remaining space in the square, the group moved to include as many groups as possible, bolstering their overarching theme of inclusivity for all.

“We really wanted to make an art piece for people that don’t [typically] have representation,” one group member said.

“Beyond school, the world is very intolerant… there is a lot of concentrated hate.”

Since the theme of Kindness Week was “Come Together,” the group intended to erase some of that hate at AGHS.

Surrounding the pride flag was a collection of thirteen additional “planets,” each representing a different, underrepresented group not shown on the flag.

The all-inclusive square glowed in the center of the quad, promoting an undisrupted message for just over 24 hours.

Then the vandals struck.

When the Gold Day football game came to an end with a victory for AGHS and the Sam Jeffers Foundation, having raised over $4,000 total during the cumulative “Miracle Minutes,” a group of AGHS students turned their back on the message for the week.

Stafford expressed his distaste for the vandalism before he even knew which square had been targeted, angry over the fact that students were cruel enough to disrupt the artistic scene and the positive message relayed by Kindness Week.

When Stafford walked over to the center of the quad to meet his sisters, he came across the square that the students defaced.

“I noticed that… the chalk talk that they had poured liquid on was the pride flag, which really upset me,” Stafford said.

The act on that Friday night triggered a chain of vandalism that toppled into the next week and beyond. No longer having to be the ones to take the first strike, students had no problem trampling or wiping away the art.

“As you can tell, they’re actively vandalizing our piece,” said one of the creators of the chalk talk square.

The artwork was continuously trampled over during lunch.

“I just witnessed homophobia,” one group member said passing through the quad, cheeks flushed and eyebrows furrowed together in irritation.

“They [a group of students] just walked over it… and stomped on it,” the fourth group member added, miming a shuffling and stomping motion as they spoke.

As defined by the United States Department of Justice, a hate crime is “a crime motivated by bias against race, color, religion, national origin, sexual orientation, gender, gender identity, or disability.”

From this, it is deductible that this wasn’t just petty teenage vandalism. This was a hate crime.

Sadly, this isn’t the first or only hate crime that has occurred at AGHS.

One of the group members recounted a hate crime that they witnessed at AGHS with disdain.

“Someone had rocks and oranges thrown at them, and that’s unacceptable.”

Though the vandalism of a chalk talk square doesn’t carry the same violent nature as actively throwing rocks and food or physically assaulting someone for their identity or orientation, it’s still detrimental in the progression for rights and acceptance of all people at AGHS.

The group members tried their best to mentally and emotionally prepare for the potential hostility and negative response of the student body, but “it[‘s] so much worse to see it in person,” the first group member said.

“We had this conversation as we were working on our sketch,” the first group member said. They noted that the group discussed before submitting their design, “Are we actually going to do this?”

The group then chose to remain anonymous after that conversation- for the art exposition and for the article.

“[It was] to avoid anyone getting hurt,” the first group member explained.

Anonymity didn’t protect the artists from the pain that accompanied the vandalization of their artwork or the invalidation of their identity, though.

“Seeing the full extent of it and how much people tried to take it down… is just heartbreaking.”

The second group member chimed in with their feelings on the issue.

“We worked so hard to make that whole image, to include as many people as we could, and it took a couple of days for people to destroy it.”

In conjunction with the relentless destruction of the piece, the group expressed disappointment regarding the handling of the issue by the school administration.

“I think the admin try to make [AGHS] that way [more accepting], but also they’re like ‘It’s not a reflection of my views but we have to be this way.”’

The group members sensed a lot of insincerity at the administrative level regarding acceptance and protection of the LGBTQ+ community.

Principal Dan Neff addressed the instances of vandalism and the administrative response to the hate.

“I’m aware that during one of the football games… some water was poured on [the chalk talk square.]”

While he was aware of the water, Neff didn’t report having knowledge of the continued vandalism of the piece that happened during the interview with the group members and frequently at lunch.

“I haven’t seen it… we haven’t talked about it,” Neff said.

Neff went on to describe some of the disciplinary actions and responses put in place for perpetrators of vandalism.

The administrative team takes pride in working as a unit with each other and with the students to come up with the proper corrective action for each student and their family.

“The point of discipline is to change behavior,” Neff said, “Not crush kids.”

In addition, Neff emphasized the importance of communication with students in order to improve the function of rules and the happiness of the student population.

“I always think of kind of a customer service model,” Neff said, “Students are our customers, and our customer base changes on what their needs are and what’s important to them and how they want to be communicated with.”

Neff is ready to make changes to continuously improve the student experience as the years go by, “it’s not the same as it was 20 years ago or 10 years ago,” he said, “we have to adapt as best as we can.”

“A big overarching goal is getting more kids involved in something at school, outside of just attending their classes.”

Neff hopes that by encouraging more student involvement with the school, each other, and the administration, students will find their place at AGHS. He acknowledged that the administrative team needs to continue to change with the times, but believes that the best way to do it is in collaboration with students.

“There’s some definite work for us to do…or all our students in general, as well as… certain groups within our student body.

Despite the efforts from admin to diminish the negative behavior among the student population, the chalk talk artists attributed some of the hate from students and school to Arroyo Grande being a semi-conservative town, surrounded by other relatively conservative areas. The lack of diversity and exposure to minorities reveals to be a setback in terms of tolerance and acceptance among students.

“That’s really reflective of the quote-unquote “culture” here, and how they treat people, especially people in the LGBTQ+ community,” the first group member said in reference to the demographic of AGHS.

Group members mention that part of the problem in an underexposed area is also a lack of education and awareness.

“Bring it up in advisory… acknowledge that these type[s] of students actually are attending their school.”

All of the group members pitched in and suggested solutions and ways to make AGHS a more accessible and inclusive space for all, even bringing up the idea of disability accessibility.

“Make sure that you’re not actively making it harder for people. One of the planets we have is a disability planet, and as someone who has several disabilities, I’ve noticed that the school is also not accessible in that way.”

The first group member explained their experience with fenced-in handicap parking and a lack of general awareness for students with less visible disabilities who may face hate because of it.

“Actually trying to enforce people being nice and not mistreating each other[would be the best solution],” they said dryly.

“[Students] should be safe… on a school campus. It should be a place to learn… not to get hate crimed.”

The other group members raised the issue of school being an unsafe safe place.

“For some students, [school] is their safe place,” the third group member said.

But when students are being hate crimed, discriminated against, and mistreated because of things they cannot control, a place where they may seek refuge becomes no longer safe nor comfortable. School should be a place where students want to go for one reason or another, not a place where they are afraid to spend their time.

As much as it’s painful to see students quite literally stomping over core parts of someone’s existence, the artists in the group refuse to let the hate stop them.

“You being mad over us being inclusive doesn’t demean the fact that we’re still going to include these minorities, and these minorities still exist whether you like it or not.”

The young artists will continue to defend their own rights of expression and equal treatment, along with those of other marginalized groups. They want it to be known that their mission for inclusivity at AGHS cannot be stopped by a handful of hate-filled peers.

When students arrived at school in the early morning of October 20th, 2021, just the next day after this original article was posted, they walked past a new chalk demonstration that surrounded the office and brought light to the voices originally impacted by the vandalism. 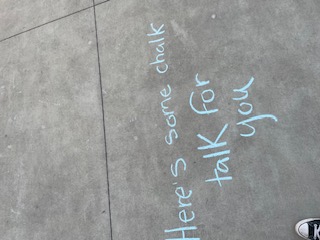 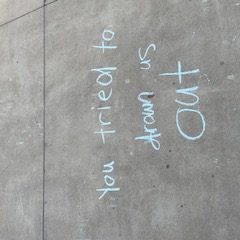 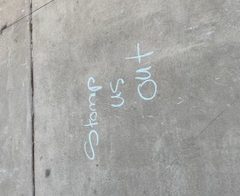 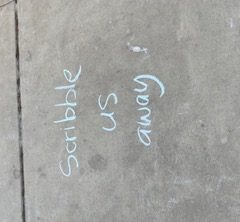 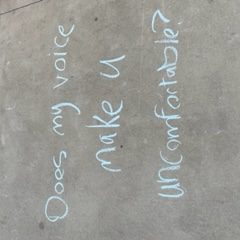 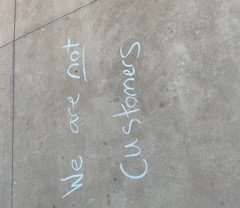 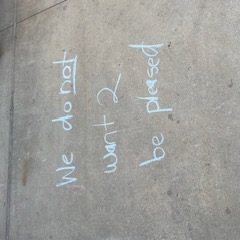 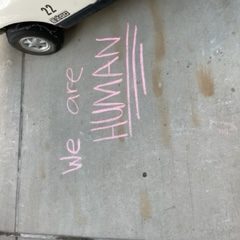 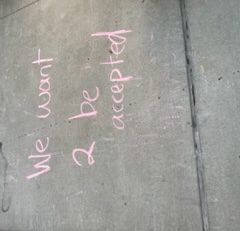 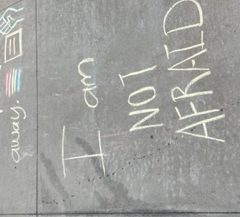 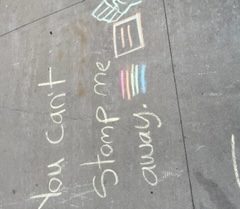 The above writings were featured in a progression from the first image to the last image between the health office and the main office. 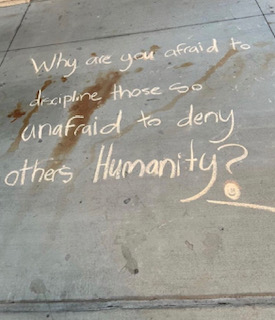 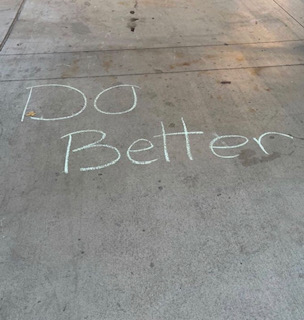 “Why are you afraid to discipline those so unafraid to deny others humanity?” Was erased by break, the washed away section of concrete pictured below. 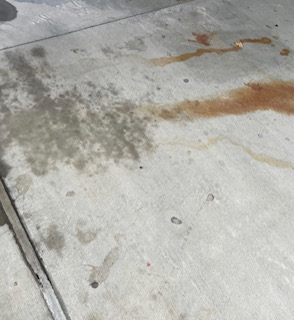