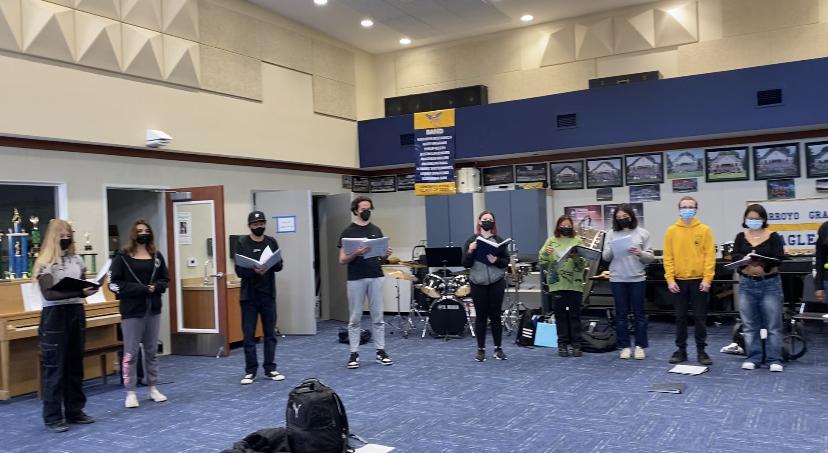 Choir students get into an arc to practice singing together.

A soprano, an alto, and a baritone walk into a choir room. There aren’t many other people in there.

During lockdown, AGHS’ choir elective was in danger of cancellation. Now, as new and old aspiring musicians have made their way into room 160, the choir is back strong. Though they’ve experienced an increase in recent numbers, the choir would still like to welcome anyone who is interested in becoming a part of the family and improving their singing abilities.

“[I got introduced to choir] through Mr. Dunsmoor, being in band… I was one of the first people to sign up to kind of save the class coming back from Covid,” Aidan York (‘22) said.

While some members, like York, heard about choir through involvement in the music department, there are others who are just learning about the class and are keeping the class size growing.

For those who don’t know, choir contains singers who can sing in various ranges in order to create harmonies.

“We usually use three parts, so we’ll have soprano, alto, and baritone,” Ella Payne (‘25) explained.

“I’m a soprano,” Kessi Bronson (‘22) said. “[Sopranos] sing high notes, me I…belt pretty loud…I try to help my group around me, my fellow sopranos, sing out and be comfortable singing out loud.”

“I’m an alto and I sing the middle part,” Zietek said.

“I am singing as a baritone and a bass, so I’m basically singing the bottom of most of the parts, countermelodies, and some harmonies. If you listen to your favorite band, I’m mostly just that baseline that sits in the back with some of the other guys in there,” York said.

A typical day for the choir class consists of doing some warmups and then jumping into vocals.

“We show up to our second period, we get in our arcs, have our music out, warm up with our accompanist Mrs. Kouklis and then we just dive straight into music,” York said.

Music means something different to everyone you ask. For choir students, music plays a huge role in shaping their emotional well-being, self-expression, and drive.

“Music plays a role in my life by positively impacting my mental health and allowing me an outlet to express myself,” Loralei Dawson (‘22) said. “It also challenges me…when I have something I struggle with I feel like it teaches me a lot of lessons.”

“Music really inspires me. I love to sing, to perform, and I love to hear the meaning behind songs and display that while singing,” Payne said.

“I’ve been doing music since I was in second grade…and it’s really important to me. It’s kind of like an escape from reality,” York said. “I come in here, I start singing, and I forget about everything happening at school, any test I have, or what’s going on in the world…and I start having a blast.”

Music acts as a tool for tuning out the world for one student more than the others.

“Music plays a huge part in my life… I listen to music more than I listen to people talk,” Zietek said.

Each member has a different reason for why music is such an important aspect of their life, yet they share a common goal of working together to present music passionately.

“The best skill [I have learned through choir] is the importance of teamwork because in choir and band in groups like that in music, you can’t do it on your own. Sure you can sing alone in your house… but when you get into a setting like choir you learn how important it is to have a group surrounding you and you know that a group will support you as a team no matter what you’re going through,” Dawson said.

Working in choir has not only helped students realize the power in a group of voices, but it has also helped them grow individually as musicians and people.

“[Choir has taught me] how to expand my range and how to project,” Carrington said.

“Music-wise, [choir] has helped me in band because I’m singing more, I’m dealing with a lot more notes, and singing them helps me kind of visualize what they sound like in my head…and that can apply to any instrument… so it definitely helps me with band,” York said.

“I have been able to practice putting myself out there [through choir]. I just auditioned for a solo and I got it,” Zietek said.

“A lot of people don’t think about critical thinking in music, but music has a lot of different components and I feel like music rewires your brain to think in a different way and with different perspectives. And so, when you’re in the classroom,  you start thinking of things through different angles,” Dawson said.

“ I know a lot of people feel scared to sing, I know it’s nerve-wracking to perform in front of people you don’t know…[but] choir has helped me gain a lot of confidence and [helped me] with making new friends,” Bronson said.

For those who may be afraid to join choir due to stage fright, choir members suggest continuing to practice, build up confidence, and recognize that nerves are just a sign of your body wanting you to do well.

“[If you’re nervous about performing, know that] you just need to keep practicing it. It doesn’t really go away, but you learn to cope with it. Backstage usually I’ll drink a lot of water, I’ll do a lot of breathing exercises, and I’ll get ready to go on. I try to remind myself that stage fright is just wanting to do a good job,” Payne said.

Dawson recommends shifting your focus to your surroundings as a way to reduce any anxious feelings as well.

“I’ve gotten stage fright many times…I feel like it’s easier when you’re in a group of people and I feel like how you overcome it is to start thinking more about the notes and the music and less about the people in the audience. You start listening to the people around you, you figure out where you are, and you realize that you aren’t alone, and you have a team of people surrounding you. That really helps with stage fright, ” Dawson said.

The human voice alone can be a struggle for choir participants because it’s not always perfect and it can be uncertain.

“You have such a larger range on pretty much any instrument… I feel like your voice is harder to master… It’s unpredictable too because of voice cracks,” Zietek said.

Other members believe that it is the complexity of a singing voice that makes it such an amazing tool, however, despite its uncertainty.

“In an instrument, you can’t feel the emotion as strongly. With your voice, you can really feel the pain, the energy, the excitement… Mr. Dunsmoor was saying that one of the hardest things to do is singing because with an instrument you can generally know what notes you will be playing, whereas with your voice you have to generate all of that yourself,” Payne said.

On top of its use to portray emotion, Dawson feels a singing voice can be used for generating connection.

“I think, by far, our voices are the best musical instruments for connecting people together, but I don’t necessarily know if that makes it the greatest instrument, I think it more just connects us as society and humanity,” Dawson said.

If music interests you at all and you would like to get better at singing, consider joining choir. No prior knowledge is required.

“My message to people is don’t listen to the stereotypes…You don’t have to have any musical background. Half of our choir this year, including myself, have never sung before. I read music and play music, but there are five, six, seven kids in there that have never seen music before in their life and they’re already learned how to read music and are singing with us. So the excuse some people give of ‘Oh I don’t know music I can’t do it,’ just try the class, and if it doesn’t work out for you you can find something else, but choir’s honestly a lot more fun than people think. They think you just come in in full seriousness, but half the period we’re laughing and joking around about some of the music and having fun…so forget the stereotypes and give it a shot,” York said.

Head to the Clark Center TOMORROW at 7 pm to listen to performances from choir, band, and percussion!

The following is the schedule for the rest of the choir performances for this year.