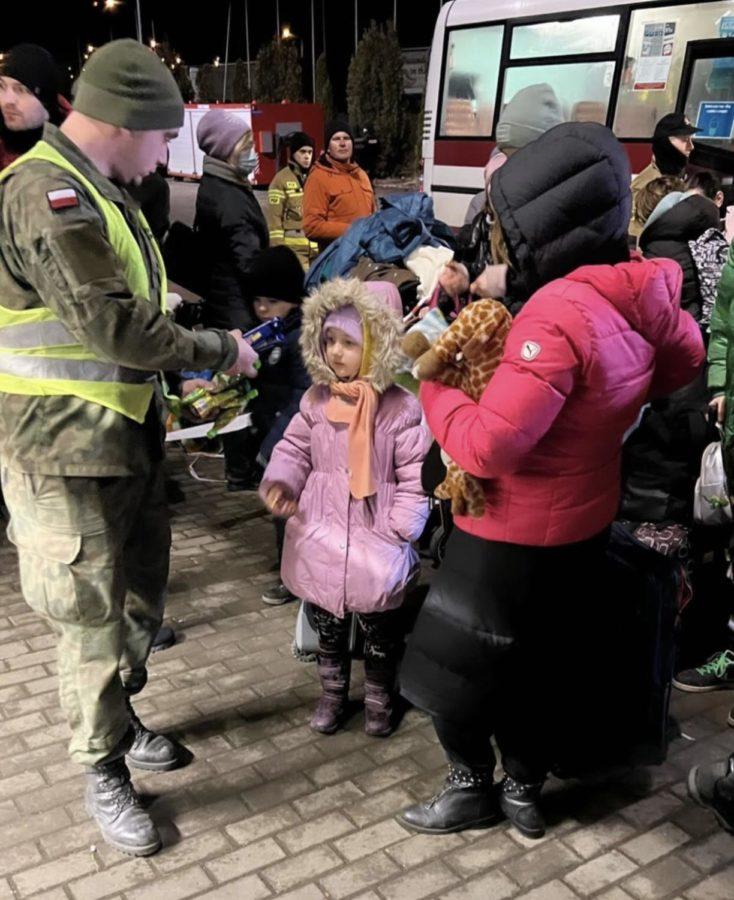 A Ukrainian child and her mother interact with an emergency official outside the buses, courtesy of Jake Knotts

Jake and Anya Knotts are currently in Poland, and their story is told by freshman Maia Knotts

In the early hours of February 24th, 2022, the most destructive conflict and humanitarian crisis in Europe since World War II began. On February 21st, just a few days before, Russian President Vladimir Putin denounced Ukrainian sovereignty and announced his plans to invade the country. On February 24th, he officially declared war.

The bombs first started dropping seven o’clock Wednesday night, last week. So about a week ago, my dad booked a flight for one o’clock Thursday, the next day. He went back right away, like right away.”

Since then, major cities and the regions of Ukraine closest to the Russian border have faced incessant attacks by Russian forces. Cities such as Kyiv, the capital, and major cities Kherson, Kharkiv, and Mariupol are experiencing almost constant shelling. As a result, millions of residents have been displaced, without food, water, electricity, shelter, and medical supplies. Critical locations around the country have been targeted by airstrikes, and it has been reported that over 400 missiles have been launched by the Russians in this invasion. While Ukrainian President Volodymyr Zelenskyy remains strong and has denied offers to be evacuated from the country, Putin has continued to target him and encourage the Ukrainian forces to turn on their leader.

More than 2,000 civilians have been killed thus far, and after the shelling of an orphanage and kindergarten, Ukrainian officials declared Russia guilty of several war crimes. Citizens of all ages and abilities are enlisting to fight, and Molotov cocktails and other weapons have been distributed in large numbers across Kyiv and the country.

As the fighting rages on, Europe has faced its fastest and largest humanitarian crisis, seeing over one million refugees fleeing the country after just a week of siege. Comparable numbers are that of the Syrian refugee crisis when it took three months to evacuate one million people from Syria. Ukraine has seen the same numbers, and growing, in just six days. As of March 3rd, the United Nations reports that over 500,000 Ukrainian refugees have fled to Poland, over 130,000 to Hungary, almost 100,000 to Moldova, and scattered thousands throughout the other bordering nations. Camps have been set up to accommodate the influx of refugees in the more impacted countries. There have also been massively backed up highways leading out of Kyiv and Ukraine, and civilians have flooded the train stations in hope of escape.

AGHS freshman Maia Knotts has a deep connection to this humanitarian crisis currently rocking the world.

“I was born in Ukraine,” Knotts said. “I moved here in 2013 when I was being enrolled for first grade.”

“My dad was a missionary there and my mom was his translator, that’s how they met,” Knotts said with a smile.

“I grew up in Northern Ukraine… two hours above the capital, so right next to Belarus and the Russian border. It’s a small town called Chernihiv. It’s a really, really pretty town.”

Chernihiv, due to the location near the Russian border, is in territory that is close to and recently under Russian control. The town was attacked relentlessly by Russian missiles on March 3rd, leaving apartment buildings, hospitals, and residential areas in ruins. The reported death toll is 47 and counting.

“The first house I grew up in and the kindergarten that I went to [are in Chernihiv], it’s just kind of hard for me to imagine [them] being ruined,” Knotts said. “Like, the house I stayed in with my friends for a month over the summer was just bombed.”

The Knotts’s family connection to the country runs deep, with extended family and close friends remaining there after the move to California.

Knotts admitted being so far away from the country and the people can slightly distort the harsh reality of the issue, “I don’t think it’s fully sunk in yet,” she said.

She then noted that she’s “been really stressed about it… because both my parents are gone right now, and a lot of our friends are really struggling over there. A lot of their friends are dying, they’re in basements.”

Knotts’s father decided to return to his home country to discover more information on his friends and family and the state of the wreckage.

“The bombs first started dropping seven o’clock Wednesday night, last week. So about a week ago, my dad booked a flight for one o’clock Thursday, the next day. He went back right away, like right away. I didn’t even get to say bye to him, so that kind of sucks,” Knotts said.

Despite Knotts’s wish to give her father a proper send-off, it makes sense to her that he would leave for Europe as soon as possible.

“If a problem arises [my dad] is on it. He’s in Poland the day after the bombs drop… he’s done stuff like this before, in the past,” Knotts said.

Not only is Jake Knotts something of a heroic archetype, but worry for friends and extended family drove him and his wife back to Ukraine.

When talking about some of the reasons that her parents went back, Knotts said that “we were really worried about our friends, because we had a lot of friends near the Russian border.”

The areas near the Russian border in all parts of the country are objectively the most dangerous, as it is where the Russian troops are attacking and gaining control first.

Knotts’s parents quickly got to work upon their arrival in Europe, working to first get family and friends to safety, then assisting other evacuations and humanitarian efforts.

“They’re going back and forth all across the Ukrainian borders. They go from Poland to Romania, to Hungary, to some parts of Northern Poland and Belarus,” Knotts said.

Knotts doesn’t seem particularly worried about the safety of her parents’ expeditions.

“In case anything nuclear happens, then I’m worried about it. Like, I’m not worried about anything happening to Poland, but something that might happen in Ukraine that affects Poland somehow,” she said.

She also stays in frequent contact with her family.

“My family is calling my dad once a day, and I’ve been texting my mom. My dad is pretty active on social media, so I don’t have a lot of questions.”

Jake Knotts’s Instagram page is public and is under @jakefrommidstate. He posts frequent updates of evacuation efforts on Instagram posts and stories, and videos of him speaking in both English and Ukrainian for his followers. He uses his Instagram as a place to document his efforts, reach out to those in need and those willing to help, and raise awareness about the current crisis.

“He’s gaining a lot of traction on social media because a lot of people are putting his videos on Instagram stories,” Knotts said.

Knotts also wanted to make it known that she doesn’t blame the Russian people as a whole for the destruction, but rather just Russian President Vladamir Putin.

“I have no hard feelings towards any Russians, though. I have a lot of friends that are Russians, so it’s kind of hard to see the Russians themselves being targeted when the main problem is Putin,” she said.

She also acknowledged her combination of appreciation and worry for those protesting against Putin’s regime and decisions in both Russia and all throughout the world.
“I appreciate the protesting and the support and knowing that there are people out there,” Knotts said, before talking about how she worried for the safety of the protesting Russians, knowing about how the protestors are placed in packed prisons or subjected to cruel methods of punishment.

In terms of what people from Arroyo Grande can do to help support the Knotts family and people of Ukraine, Knotts offered a few solutions.

“Donate what [you] can, and make [the issue] public and more publicized,” she said, due to the fact that California is so far away and less able to physically assist.

“My parents have a GoFundMe … and they’re using all their proceeds to get housing and clothes and food for our friends and their friends and all the refugees.”